After applying impregnation to the wall, I'm not sure of the shiny thin film which was created.

First of all, the glossy film on the wall after apllication of impregnation is the sign of excessive penetration. If the substrate is solid and cohesive (such as concrete) and it is deeply penetrated, there is no risk of peeling from the substrate. The surface should be lightly sanded to make it rough and then use less diluted paint.

However if the substrate is less cohesive, it is possible that large impregnation molecules remained on the surface. Thus the substrate is not fully reinforced and it might crack and peel. In this case, it would be preferable to remove it or scrape off (provided that the impregnation did not penetrate into depth and there are still incoherent layers of old paintings). Then clean, repair and penetrate the surface with Primalex Primer. 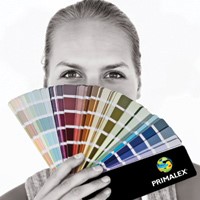